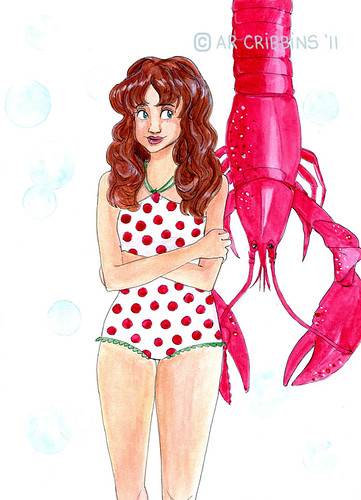 Hey, friends! I haven't fallen off the earth or anything. I've just been kinda holed up with my painting/illustration stuff. Both James and I are logging a lot of work-at-home time in the apartment as he continues to study for his CPA exams. Thus our spare time has been mainly outside the apartment and not online :/ It's a little scary to be smack in the middle of this career-starting mode! There is...a lot to do.

In "yay" news, I have a couple of pieces of art appearing in the next issue of Imitation Fruit :D

I also have an auction thread up at

help_kelly. Here's what that's about:

subluxate) is a dear friend to many of us. Kelly is also, for no fault of their own, in a financial mess. The government has neglected to send Kelly the Social Security payments they should have gotten as somebody on disability.

This community aims to raise at least $1,000 for Kelly, with which they will be able to do some of that.

For my thread, I'm offering full color, single character commissions and I'm planning on taking the top two bidders. MY THREAD IS HERE. Bidding starts at $10. The auction ends on Sept 25th. Come bid if you want! Make me draw you something and raise some $$ for Kelly.

SO HEY GUYS, I'm getting married this weekend then it's honeymoon time!
I've got so much going on this week that you probably won't see me til August.
But then I'll be back and super married.

See you then! And thanks, everyone, for weighing in on my sticker poll ♥

I'm trying to decide between these two colors for an order of promotional stickers. I think the actual stickers will just have dots instead of my name (and my name printed on the peel-off sheet instead) but I didn't mock that up yet.

But if you guys are scrolling past this and want to give me a quick opinion, I'd really appreciate it! I think if I go with the blue, the rain-dots will be white instead of purple.

Open to: All, detailed results viewable to: All. Participants: 25

Which background color is better?

so I'm remembering the regional dialect meme from a while back and this one question is bugging me:

What do you call the kind of spider that has an oval-shaped body and extremely long legs?

Here's the thing: I remember a couple of people saying "a daddy long-legs is not a spider." I think it was mentioned that they only have six legs? This confused the heck out of me because I could have sworn that these critters had eight legs and were, in fact, spiders. I only thought of this because I happened to find one in the apartment today. And I counted its legs.

Which means either it was a mutant with an extra leg or (more likely) what I've been calling a daddy long-legs is indeed a spider with eight legs and this one had an accident.

Open to: All, detailed results viewable to: All. Participants: 22

Is daddy long-legs a spider?

Where are you from?

ETA: Whoa wait, Harvestmen are arachnids too? WTF is the 6 legged analog people are seeing?? Is losing legs just really common to this kind of spider?

I believe the last time I wrote anything substantial about a movie on my LJ it was Teeth. So Kaboom is in good company.

James and I decided to check out the Living Room Theaters yesterday for a change of pace, so he read the google blurbs on the movies currently playing and found this:

"Kaboom" is a hyper-stylized "Twin Peaks" for the Coachella Generation, featuring a gorgeous young cast. A wild, witty and sex-drenched horror-comedy thriller, it is the story of Smith, an ambisexual 18-year-old college freshman who stumbles upon a monstrous conspiracy in a seemingly idyllic Southern California seaside town

AND OH MY GOD THIS MOVIE IS RIDICULOUS. But it was lots and lots of fun to watch. We both thought it sounded like something we'd like, and we both wound up really enjoying it. I bet there are a fair amount of people on my flist who would like it too :) Ebert's review noted, "If the events in "Kaboom” are anything, they're arbitrary." And I totally agree with that. I just didn't see it as that much of a problem...given that nothing that happens in the movie really winds up mattering, it's more about the ride.

This is first Gregg Araki movie I've seen, but I'll probably have to watch more now. There were a lot of little things in Kaboom I found really refreshing . The main character, Smith's, sexuality for one, and how that was handled. Basically the first scene in the movie feature's Smith's gay fantasy about his roommate, Thor. Smith, soon after, says he has sex with both men and women (which we see plenty of later). Smith's BFF Stella gives him shit about this, saying "That you randomly, sometimes stick it in a girl does not mean anything beyond you need to monitor your drinking."

All of the 'discussion' on this comes from Smith's friends and none from Smith himself, who I think says he's "undeclared" when pressed for an answer. And after a little while...everyone kinda stops caring about Smith's sexuality. Given Araki's had personal experience with this kind of monosexual backlash, it doesn't surprise me that things play out like this...but it's still kinda cool, right?

And the relationship between Smith and London—the girl who approaches him at a party for a hook-up and then becomes his FWB—was kinda cool too.

Oh, and given there is a whole subplot about Stella's relationship with Lorelei, a woman with supernatural powers...it definitely passes the Bechdel test.

(Yeahhh, there are people with supernatural powers in this movie. And Stella shrugs it off—"She's a witch"—like it's no big deal. Which is pretty indicative of the film's overall tone, tbh.)


No spoilers but: WOW, THE END. The end, which various reviewers have complained about, left James and I both CRACKING UP until the credits rolled. As soon as "The Bitter End" by Placebo started playing, I pretty much lost it.

Kind of a cross-post from my sketchblog, this is a five page comic I made for my cartooning class this quarter. It serves more as an introduction than an actual story, but I hope it's fun nonetheless.

All of this is ink (mostly used with a brush) on Bristol, with some tones added digitally. (View full size if you want to see how the tones are supposed to look!) And yeah, I hand-lettered the whole thing. Using an Ames lettering guide, even. And can say now with confidence: HAND LETTERING IS A PAIN. 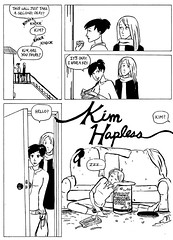 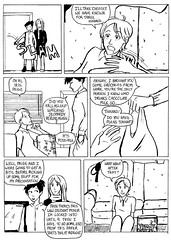 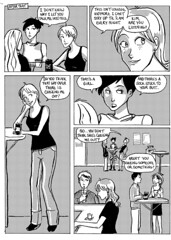 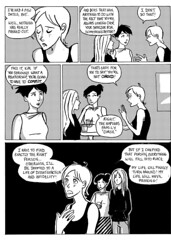 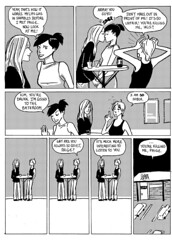 I have a few more ideas for these characters, so we may see more of them in the future. Even though a page of this basically takes me a whole day hahahaha...

ALSO: FIVE NINE DAYS LEFT TO BID ON ME FOR